Researchers have identified the cause of a mysterious illness that has affected 3 families over the past 20 years, and have termed the new disease Cleavage-Resistant RIPK1-Induced Autoinflammatory (CRIA) Syndrome.

Patients with CRIA have symptoms typical of an autoinflammatory disease, such as fever, swollen lymph nodes, severe abdominal pain, gastrointestinal problems, headaches and, in some cases, abnormally enlarged spleen and liver.

Although the condition is not life-threatening, patients have persistent fever and swollen lymph nodes from childhood to old age, as well as other symptoms that can lead to lifelong pain and disability.

Patients were first seen at the NIH Clinical Center where infection and cancer was ruled out. The researchers then sequenced gene regions across the genome and discovered only 1 gene -- RIPK1 -- to be consistently different in all patients. The researchers identified a specific type of variation in the patients -- a single DNA letter at a specific location incorrectly changed. This change can alter the amino acid added to the encoded protein.

Remarkably, each of the 3 families had its own unique missense mutation affecting the very same DNA letter in the RIPK1 gene. Each affected person had 1 mutant and 1 normal copy of the gene, while the unaffected family members had 2 normal copies of the gene.

The researchers also looked at 554 people with sporadic unexplained fever, swollen glands, and other symptoms or diseases from public sequence databases to see if they encountered the same RIPK1 mutations. When they did not find such mutations elsewhere, it was clear that they were onto something new.

“It was as if lightning had struck 3 times in the same place,” said Dr. Kastner. “This discovery underscores the tremendous power of combining astute clinical observation, state-of-the-art DNA sequencing, and the sharing of sequence data in large publicly-accessible databases. We live in a very special time.”

Seven patients with CRIA were given therapies that are known to reduce inflammation. While drugs such as etanercept and anakinra had little effect on the patients, tocilizumab did. Tocilizumab reduced the severity and frequency of CRIA syndrome symptoms in 5 out of the 7 patients, in some cases with life-changing effects.

“As a physician-scientist, the most thrilling experience to me was to hear the mother of a patients with CRIA say that her son was a completely different, healthy child after the tocilizumab treatment,” said Hirotsugu Oda, MD, NHGRI. “Through the genetic diagnosis, we were able to contribute to the treatment of a few patients. This is, after all, the ultimate goal.”

The researchers are now trying to understand the detailed molecular mechanism that enables tocilizumab to treat CRIA. Specific inhibitors of RIPK1, which are under development, may also hold promise in both CRIA and other seemingly intractable inflammatory conditions. 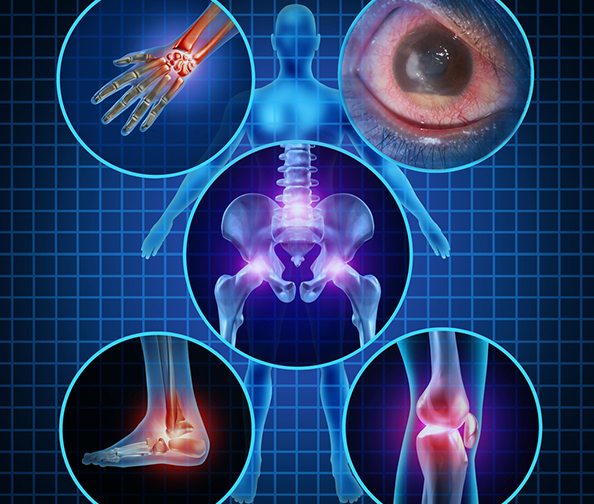 PeerVoice invites you to explore the education and resources on this site that provides a comprehensive approach to managing patients with rheumatologic conditions.

Insights and developments from leading experts.

Helpful resources for your practice and patients.

Treating RA to Target: 2014 Update of the Recommendations of an International Task Force

Importance of Registries in Informing Clinical Practice for Arthritis